The Potential Minimum Wage Increase: What to Expect and How to Deal with It

In July of 2018, the United States House of Representatives passed the Raise the Wage Act, a bill aimed to increase the federal minimum wage to $15 an hour by 2025. The Raise the Wage Act was unlikely to pass in the Senate and never did. However, with a new administration coming in that has made a push to do so, and with democrats (most who support increasing the federal minimum wage) taking control of the house and senate, a resolution aimed at such is more likely to happen this election cycle.

There have been cheers by some members of congress who believe passing legislation, that would double the current federal minimum wage, would be a monumental success. This ignores the opinions of most labor economists, who argue this type of policy contends past data, history, and the input of industry experts.

The Bureau of Labor Statics (BLS) shows that only 1.6% of employees earn minimum wage or less. That estimate is based solely on the hourly wage workers report, which does not include overtime pay, tips, or commissions. The BLS also shows that the number of workers “earning” minimum wage or less has decreased every year since 2010 by an average of 13.2%.

Another common argument made by congressional members for increasing the federal minimum wage is “many people don’t have a solid job and instead are forced to work two jobs to make ends meet.” However, the BLS also shows that individuals holding more than one job has remained below 6.3% since 1994, and below 5% since 2010. See the graph below for reference. 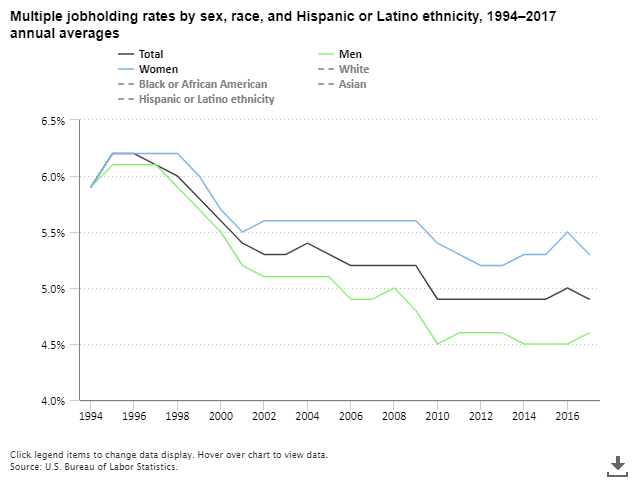 It is also important point out that the definition of a “multiple job holder” includes individuals who obtain secondary seasonal jobs, are high income earners, countless members of congress, Presidential Cabinet members, high-profile figures like; Tucker Carlson, Rachel Maddow, Dwayne “The Rock” Johnson, and even our former President Donald Trump.

This refutes the argument of most politicians and political pundits who support increasing the minimum wage on the basis that most “multiple job holders” are low-income earners and/or live below the poverty line. I’d argue that assuming a “multiple job holder” is poor and they only work multiple jobs due to financial constraints, rather than because they’re ambitious or would like to get ahead financially, is not only offensive, according to the US Census Bureau it is categorically false. The median income for a multiple job holder (in 2016) was well above the poverty line, and even at a 60-hour work week without overtime, well above the current minimum wage.

Before any readers start to think this is a politically motivated piece, or written with a political bias, let me assure you that I hate all politicians equally. Any theories or opinions I have formulated in this article are based on the data gathered from reputable sources (listed below), historical performance, my personal experience as a business owner and advisor to other businesses, and the knowledge of other industry experts.

While not raising the minimum wage may seem heartless, a discussion about where the resources to pay the inevitable increased expenses and any other unintended consequences, is an important conversation to have. Many politicians and political pundits that support an increase in the minimum wage, expect these expenses to be paid by that hypothetical bed of money all those greedy business owners sleep on at night. However, recent regional data and past historical data shows that it will not.

Any increase in employee compensation would need to come from profit margins, an increased price on products/services, extremely innovative cost reduction methods, or a mixture of the three.

While profit margins can vary greatly based on industry, as an economic whole the average profit margin in the United States is less than five percent. A five percent profit margin alone cannot sustain this increased expense. Therefore, businesses would need to increase prices and rely heavily on cost reduction methods to be compliant with federal law. Unfortunately for the currently employed, the most common cost reduction methods negatively affect employees. This includes methods such as; reduction in employee benefits, outsourcing, reducing payroll costs by hiring/paying employees as independent contractors (1099), reducing employee hours, and increased automation and efficiency (which historically replaces and cuts jobs).

The majority of labor economists (70%) believe that the best way to help those living below this poverty line is through tax credits, which the Tax Cuts and Jobs Act (TCJA) does by doubling the standard deduction. That paired with the Earned Income Tax credit substantially increases the amount of tax benefits available to low income earners. So, while an increase in the minimum wage may seem well intended, the experts believe that the outcome will not benefit those whom this increase intends to benefit.

So, what can we expect if a $15 an hour minimum wage increase does pass in congress and the executive office? Reviewing historical constants, as consumers we can expect an increase in the cost of goods and services to be proportionate to the increase expense added to produce said goods and services.

It is not uncommon to see a decrease or flatline of costs of said goods/services in some industries two to five years plus after that initial increase in costs. However, the drop is normally associated with automation within those industries. Automation has made many products such as cars, computers, and fast food more affordable. However, automation commonly replaces many entry level and unskilled labor positions. Therefore, the initial increase in costs will likely be consecutive with or followed by an increase in the unemployment rate, specific to entry level and unskilled labor. We have already seen this regionally throughout the U.S. in specific cities and states that have raised the minimum wage to $15.00 an hour.

The other constant that we can expect to see is a reduction in full-time employment and hours worked per week for employees who are paid hourly, paired with a large reduction in overtime pay. We have also seen this regionally through the U.S. in those same cities and states.

We can also expect to see an increase in the independent contractor and 1099 labor market. There’s not enough historical data to correlate this cost reduction method, but it has become a common strategy for employers to cut back on costs such as payroll taxes and the necessity to offer benefits to be compliant with federal employment guidelines. We have already seen an increase in the independent contractor/1099 labor market for the past two decades with around a quarter of the current labor force already falling into the category. Many labor economists expect this to increase to nearly half of the labor force within the next 10 years.

Fortunately for our readers, there are some commonly overlooked solutions to cut back on costs without having to cut into profit margins or sacrifice employee benefits.

If you do think any of the above strategies can be a viable option for you, you can always schedule a quick introductory Zoom meeting or call with myself or one of our partners to review.

Federal Register :: Establishing a Minimum Wage for Contractors, Notice of Rate Change in Effect as of January 1, 2021

Biden calls to raise the federal minimum wage to $15 per hour (cnbc.com)